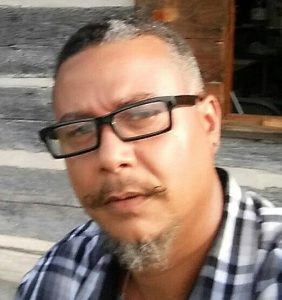 Shannon Scott is a Junior History major from Middleport, Ohio. He will complete an associate’s degree in History and Sociology in May of 2018, and continue on to complete a B.A. in History. He attended Meigs High School in Pomeroy, Ohio.

Did you grow up with siblings or pets? Yes, one younger sister.

What was your best experience in high school? Attending the International Jr. Civitan Convention held at Georgia Southern University.

Who was your most influential high school teacher? My football coach, Bob Ashley.

Why did you choose Rio? It was a community college close to home—started at the Meigs Center, now attending the Rio campus.

What’s your best experience at Rio so far? The support I have received from the Rio staff (family).

What’s your greatest achievement as a student? As President of the Meigs County Historical Society, I held its first lecture Feb. 17, 2017 with more than 50 in attendance including Jake Bapst, Rebecca Long, Thomas Sutton, Teresa Oiler, and Jack Epstein. The material covered the little-known achievements of two Pomeroy African-American men who became the first and second presidents of what would later be known as West Virginia State University- James Edwin Campbell, dialect poet and first president, and James McHenry Jones, writer, well-known public speaker, and second president. After this two-hour presentation, I began receiving emails from people across the country for information about the area.

Why did you choose to major in History? Because it is what I am passionate about. I feel like not enough importance is placed on teaching this subject to our youth.

What was your favorite course at Rio so far…and why? Literary Imagination with Jackson Connor, because of the reading and the in-class discussion about it afterwards.

What do you plan to do after graduation? Write a book about the accomplishments of African-Americans from Meigs County, Ohio and begin efforts to save the school and church these men and women attended, which are the only buildings left in this neighborhood.

Where do you see yourself in ten years? Successful author/speaker and public educator, founder of the Kerr’s Run Foundation for the Preservation of African-American History and Inspiration.

What’s the best part of being a student? Learning new things and meeting new people.

What’s the worst? Midterms and finals.

What advice would you give to incoming Freshmen? Work hard and take it seriously.

James Edwin Campbell, author of 2 books, dialect poet, editor, writer for multiple newspapers in Chicago, and first president of WVSU, who died at the age of 28.

What is your favorite book: The Narrative of an American Slave, by Frederick Douglas.

If you could move anywhere, where would you go? Someplace where I could fish all year round (warm).

Favorite quote: “Those who have no record of what their forebears have accomplished lose the inspiration which comes from the teaching of biography and history.”— Carter G. Woodson

What’s the one thing that most people don’t know about you? I belong to a motorcycle club.

Please join us in congratulating Mr. Scott on his accomplishments and being selected as our Spring 2018 Spotlight on Student Success recipient!