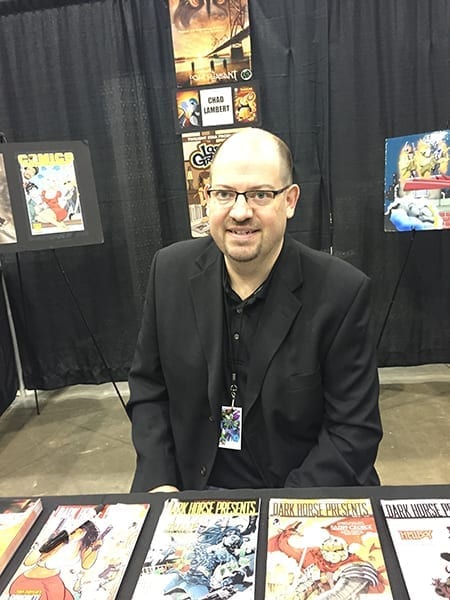 Chad Lambert grew up in Jackson, Ohio, graduating from Jackson High School in 1989, and came to Rio where he completed a degree in Mass Communication in 1994. He currently works as a copywriter for an ad agency, and writes comics nights and weekends.

What made you choose Rio?

I wasn’t an academic genius or a star athlete, so there weren’t any obvious scholarship opportunities for me. Like most hardworking families in the area, there’s no logic in spending a small fortune on a college education. Rio provides tremendous value to area residents, so that was the decision. In hindsight, it was the best decision I ever could have made. Every aspect of my adult life can be traced back to my years at Rio.

What was your best professional experience at Rio?

I spent two years writing and illustrating Possum at Large, a weekly political comic strip for the Signals. I learned more from a weekly deadline than you could ever imagine. Twenty years later, that little comic strip became an award-winning comic book series. I spent my last two quarters as editor of the Signals, and, through an outreach program, I was able to get a part-time job at WKOV-FM thanks to my experience and passion for radio that I got from Rio.

What was your favorite course at Rio and why?

Intro to Radio & TV and Creative Writing for Publication pretty much set the course I’m still on.

What do you miss most about Rio?

I miss the optimism of realizing who you are and what you want to be when you grow up, although any artist will tell you that quest never actually ends.

What advice would you give current students at Rio?

Despite what society tells you, getting a college education is still a privilege. Treat it that way! Feel lucky that you’re getting the opportunity to grow and learn. Make the most of it. No one will ever hire you because you have a degree; they will hire you because you have passion and experience and a willingness to continue to grow and learn. Don’t just do the minimum. Go out there and make sure the college experience was worth your time and effort.

Where do you work now? What’s your job title?

I currently juggle two careers. By day, I’m a copywriter for an internal creative ad agency within Mercy Health. At night and on the weekends, I write comic books. Prior to that, I spent a decade in radio.

What was your first “big break”?

When I became a 26-year-old intern at The Gary Burbank Show on 700 WLW. I was two years out of college, and everyone thought I was nuts to take an unpaid gig at a radio station, but it really, really paid off. I spent seven years as a writer/producer on that show. Gary Burbank was inducted in to the National Broadcasting Hall of Fame in 2012 (with Howard Stern and NPR’s Terry Gross). Writing about those experiences 20 years later would lead to my second big break: a publishing contract with Dark Horse Comics, one of the largest comic book publishers in North America.

What are some of your greatest or most recent accomplishments?

In September 2015, I won two Harvey Awards for my work at Dark Horse. In October, I won the Geekie Award for Best Comic Book in Los Angeles.

What kinds of projects are you working on now?

I’m currently developing a full slate of projects. Hopefully one or two of them will see the light of day.

What’s next in your career?

No idea. You can’t plan out this kind of absurdity.

If you couldn’t have your current career, what would you be doing?

I honestly can’t imagine doing anything else. I know it sounds corny, but I’ve tried everything else, and this seems to be the only thing I can stand to do for extended periods of time.

If you could spend the day with any writer or artist, living or dead, who would it be?

Ray Bradbury. I actually got to spend a couple of hours interviewing him in 1996 for a local arts magazine, and it was magical. I could have talked to him all day.

What is your favorite book? The Mothman Prophecies by John A. Keel

Favorite Artist/Musician/Writer: As an artist-type myself, these are impossible questions to answer. 🙂

Favorite Quote: “It ain’t about how hard ya hit. It’s about how hard you can get hit–how much you can take–and keep moving forward. That’s how winning is done!” –Sylvester Stallone, Rocky Balboa

If you could live anywhere, where would it be?

Do you live with a spouse, children, roommates, pets?

Married to Angela Price (Rio ’94) since 1995. Two boys: Spencer and Sam. We also have a dog named Jack who doesn’t seem all that interested in me.

What’s the one thing most people don’t know about you?

My high school career aptitude test predicted I would be an Assistant Pool Manager.