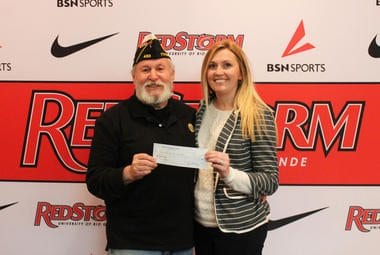 District 7 Commander of the American Legion in Ohio Jim Volgares, pictured with Rio’s Director of Alumni Relations, Delyssa Edwards, presented checks on behalf of District 7 as well as the 40 and 8 Post 443 to go toward purchasing a permanent Veteran of the Year Award display.

Rio Grande, Ohio – The University of Rio Grande and Rio Grande Community College takes pride in honoring veterans who have served and are continuing to serve our country. As part of this endeavor, Rio created the “Jim Marshall Veteran of the Year Award” to recognize veterans who have gone above and beyond the call of duty. Rio and the newly formed Veterans Committee have been raising funds needed to create a display in the Lyne Center to honor winners of the award. Jim Volgares, District 7 Commander of the American Legion in Ohio, presented checks on behalf of District 7 as well as the 40 and 8 Post 443 to go toward purchasing a permanent Veteran of the Year Award display to be set up in the Lyne Center. Volgares, of Post 433 in Ironton, said he is glad to see the institution working to show respect for military veterans.

“It’s so unique for a university and a university president to step up and create this kind of award to honor veterans in its surrounding communities. When I first heard about the award and the veterans banquet Rio hosts, I was eager to support their efforts,” Volgares said. “We chose to make these donations, because we felt Rio is doing a wonderful job at making sure our veterans are appreciated.”

Rio first presented the inaugural award to Jim Marshall in 2016, who passed away this past October. Marshall was a valued member of the Rio Grande Men’s Basketball Team where his character, attitude, performance, and leadership served to inspire his teammates. He left Rio to serve his country in the US Military during the Vietnam War and was awarded the Purple Heart. U.S. Army Platoon Sergent Mortar Unit Walter McCarley of Vinton, Ohio was selected as the 2017 recipient. Athletic Director Jeff Lanham said the display will commemorate Marshall, McCarley and future recipients of the award.

“As an institution, our whole purpose of this is to honor all veterans. This will be a permanent display on our campus to recognize the individuals who have received this award,” Lanham said. “I think these donations show this is not just a local effort for our local veterans. It spreads out wider than that and shows the passion veterans have for this type of display and honor for their fellow veterans.”

The athletic department has already begun taking nominations for 2018 recipients of the award. Nominees are expected to have similar values and equal dedication to both country and community as Jim Marshall. Recipients are not limited to athletes, Rio Alumni or even Ohio residents. The award can also be received posthumously. Lanham said nominations are open through July 31 and the recipient will be announced at the Veterans Banquet in the fall.

“Rio is dedicated to making sure all veterans receive the recognition and respect they deserve when they are visiting our campus. For over 200 years, we have relied on our veterans to allow us to have freedom in this country,” Lanham said. “This award is one small way we can give back to our veterans and thank them for their service in the military and their service as leaders in their communities. Opening this award to all veterans regardless of ties to Rio or the four-county area represents what Rio is about and our respect for all veterans.”

Another way Rio continues to honor veterans in our area is to offer free admission to all athletic events at Rio’s campus during the 2017-2018 year. For more information on how to nominate a veteran for 2018, contact RedStorm Athletics at 740-245-7293.