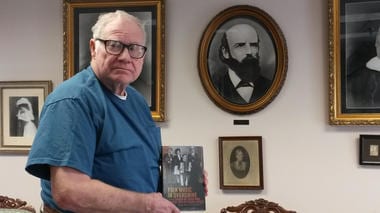 Professor Emeritus Ivan Tribe has spent several years researching the history of country and folk music throughout Appalachia. Tribe’s latest book, Folk Music in Overdrive: A Primer of Traditional Country and Bluegrass Artists, is a collection of articles focusing on the history of lesser-known artists who were important in shaping the culture of their musical genre. He is pictured with a photo of his ancestor, Rio Founder and Free Will Baptist Minister, Ira Haning.

A University of Rio Grande Professor Emeritus has recently published his 12th book. Former Professor of History Ivan Tribe has spent several years researching the history of country and folk music throughout Appalachia. Tribe’s latest book, Folk Music in Overdrive: A Primer of Traditional Country and Bluegrass Artists, is a collection of articles focusing on the history of lesser-known artists who were important in shaping the culture of their musical genre. Tribe said he first became interested in researching folk and traditional country music from research for graduate school.

“In the mid-60s I became interested in pre-World War II country and bluegrass music. I began collecting records and wrote articles in graduate school, which dealt with urban images in country songs as well as a case study of songs written about the Silver Bridge Disaster. I continued to research and write articles on similar subjects over the years,” Tribe said. “Fellow scholars and I have talked in the past about combining some of my articles into a book like this one. This was a great opportunity for me to revise and update some of the earlier articles for republication. The process of choosing and revising the articles, as well as formatting the book, took about a year to complete.”

Tribe has published these articles over the last 45 years in numerous national and regional publications. The book also includes two new unpublished articles. During his years of research, in which he has published over 200 articles for multiple publications, he has had the opportunity to meet numerous artists and hear their stories directly from the source. He said he enjoys sharing the history of country and bluegrass music, as well as its cultural impact.

“American country and western music is an important part of American culture, specifically, the culture of the common man. Until the last 60-70 years, this genre as well as other cultural genres of music were mostly ignored by academics,” Tribe said. “The articles in this book include several lesser known musicians and bands because while they may not have had the same fame as some larger names, they had an equally large impact on country and bluegrass music.”

Tribe first came to Rio as an adjunct professor in 1976, and held numerous positions until his retirement in 2007. After retirement, Tribe has continued to teach a handful classes throughout the years at all of Rio’s campuses. Country Music Scholar and Professor at East Tennessee State University Ted Olson, who wrote the Forward for the book, said he believes Tribe’s book is will help readers develop a new interest in the genre.

“Knowledge of and appreciation for traditional country and bluegrass music will be profoundly enhanced because Tribe cared about such people and their contributions to our collective musical culture,” Olson said.

Tribe is one of the many professors who have researched and written or co-written books, articles or other publications related to their field or the history of Rio. Provost and Vice President of Academic Affairs Dr. Richard Sax said he believes professors’ continued field research is a key factor in providing students with quality education.

“Dr. Tribe’s text, published by the University of Tennessee Press this past summer, has already taken its place as a definitive text concerning traditional country and bluegrass music. At a teaching-intensive higher education institution like Rio Grande, it is rare but wonderful when such scholarship is produced,” Sax said. “Although Dr. Tribe is now retired from teaching and an Emeritus Professor of History, he continues to be an exemplar concerning how our teaching can influence our research and vice versa. His passion for his subject matter is laudable, and the text is a ‘good read’ for scholars, musicians, and the general public.”

Folk Music in Overdrive: A Primer of Traditional Country and Bluegrass Artists is available in stores and online. Tribe, who is a great-great-grandnephew of Rio Founder and Free Will Baptist Minister Ira Haning, has also published multiple books about or related to Rio’s history. He is currently drafting his 13th book, a biography of famous Rio Alumna Beryl Halley, which he is co-writing with retired Rio professor, Jake Bapst.