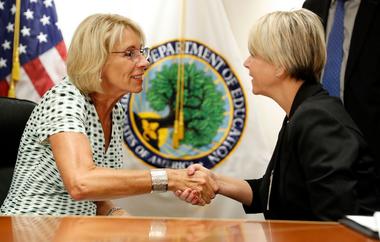 Rio President, Dr. Michelle Johnston, was invited to Washington D.C. for a discussion of Title IX issues with Secretary of Education, Betsy DeVos. Johnston was one of three presidents in the country to participate in a small roundtable discussion.

Rio President Dr. Michelle Johnston was invited to represent higher education institutions from around the country in discussions about Title IX issues with Secretary of Education Betsy DeVos. A series of three “listening sessions” were held in Washington, D.C. on Thursday, July 13.

Secretary DeVos met with victims and victim advocacy groups in one session, due process advocates in another session, and higher education and K-12 education representatives in the third and final session of a daylong Summit on sexual assault response and prevention. Dr. Johnston was one of three presidents in the country who participated in the Summit, and she had the opportunity to speak openly and directly to Secretary DeVos as the Department of Education considers aspects of compliance and support with regard to Title IX.

Dr. Johnston was invited to attend the press briefing that occurred at the end of the Summit, and she was able to further share her perspectives with the national media on the safety and security of our campuses and our students. The National Association of Independent Colleges and Universities (NAICU) advocated for Dr. Johnston to have a seat at the table, as she has been a strong voice for sexual assault response and prevention initiatives.