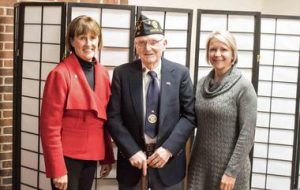 U.S. Army Platoon Sergent Mortar Unit Walter McCarley received the second annual Jim Marshall Veteran of the Year Award at the University of Rio Grande and Rio Grande Community College. The award recognizes veterans who have gone above and beyond the call of duty both in the military and as leaders of their communities. Pictured left to right are Chair for the University of Rio Grande Board of Trustees Kay Irvin, award winner Walter McCarley and Rio President Dr. Michelle Johnston.

The University of Rio Grande and Rio Grande Community College takes pride in honoring veterans who have served and are continuing to serve our country. As part of this endeavor, Rio created the “Jim Marshall Veteran of the Year Award” to recognize veterans who have gone above and beyond the call of duty. Athletic Director Jeff Lanham said this award is a reflection of Rio’s efforts to be a veteran-friendly campus.

“Rio is dedicated to making sure all veterans receive the recognition and respect they deserve when they are visiting our campus,” Lanham said. “This award is one small way we can give back to our veterans and thank them for their service in the military and their continued service as leaders in their communities. The recipient does not have to be an athlete or even from Rio. Rio Grande is worldwide because we represent many states as well as many countries, opening this award to all veterans regardless of ties to Rio or the four-county area represents what Rio is about and our respect for all veterans.”

The second annual award was presented to Walter McCarley of Vinton Ohio this past Saturday. McCarley was promoted to U.S. Army Platoon Sergent Mortar Unit in 1951 and served in Korea from 1952-1953. After returning to Vinton from his time in the service, he worked at East Liverpool as an electrical contractor, and raised two children, Bill McCarley and Kathy Hollanbaugh, with his wife, the late Marian McCarley. He is a former council member of the Village of Vinton and a member of the American Legion Post 161, as well as a life member of both the Disabled American Veterans in Middleport and the Veterans of Foreign Wars Post 4464. Retired Gallia County School Administrator Pat Stout of Bidwell  suggested McCarley for nomination for the award and said he believes he deserves the award for being a leader and role model in Gallia County.

“I’ve known Walter for years. He’s always been very active, putting in a lot of time and effort, at the American Legion as well as the VFW and the DAV. He’s someone you can count on at our post. The commander and I felt he was at the top of the list for members who deserve to be recognized,” Stout said. “I know this honor means a lot to him and his family. He deserves recognition for all he has done, and continues to do, for our country and community. I think it’s great Rio has this award because it’s important for all communities to take time to recognize the men and women who have given so much to their country without expecting anything in return.”

The committee to select the winner chose McCarley due to his similar values and equal dedication to both country and community as Jim Marshall. Marshall was a valued member of the Rio Grande Men’s Basketball Team where his character, attitude, performance, and leadership served to inspire his teammates. He left Rio to serve his country in the US Military during the Vietnam War as 1st Sergeant, Kilo-Battery—4th Battalion—13th Marines. He was injured in combat and awarded the Purple Heart. He joined the 684th Army National Guard in 1974. Marshall passed away earlier in October. Former Rio Athletic Director and Men’s Basketball Coach Art Lanham said he hopes this award will continue to honor the legacy Marshall left at Rio.

“Jim’s dedication to get back in the game after his injury was unbelievable,” Art Lanham said. “His demeanor and perseverance even earned him respect from the opposing teams. This is only one of the many reasons we decided to name this award for him. We want him to always be remembered at the University of Rio Grande and Rio Grande Community College.”

Another way Rio continues to honor veterans in our area is to offer free admission to all free entrance to all athletic events at Rio’s campus during the 2017-2018 year. For more information on how to nominate a veteran for 2018, contact RedStorm Athletics at 740-245-7293.