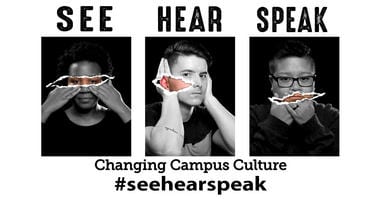 Rio recently launched a new “See, Hear, Speak” campaign to create awareness and to educate students and the campus community about sexual assault prevention. Primarily developed by students, the campaign’s goal is to encourage bystander intervention by which individuals are empowered to speak up and report any form of sex-based harassment they see or hear.

The University of Rio Grande and Rio Grande Community College recently launched a new “See, Hear, Speak” campaign to create awareness and to educate students and the campus community about sexual assault prevention. Primarily developed by students, the campaign’s goal is to encourage bystander intervention by which individuals are empowered to speak up and report any form of sex-based harassment they see or hear. Title IX Coordinator Chris Nourse said Rio promotes a campus culture of shared responsibility and mutual respect for all students, and is grateful the students are leading the efforts to achieve this goal.

“This is something that affects campuses across the country. This campaign will help us raise awareness of the problem, and more importantly, what we can do to prevent and respond to cases of sexual assault and violence, as well as what they can do to support survivors. See, Hear, Speak is a play on the phrase ‘see no evil, hear, no evil, speak no evil,’ but in these instances, we want to empower students to take action and safely intervene before an incident occurs,” Nourse said. “We’re so proud of our student leaders who have played a role in developing producing and leading the multi-media campaign, which includes posters, YouTube videos, social media posts, and in-person discussions on campus.”

The campaign is a result of the consortium created through last year’s Shared Responsibility Grant, awarded to Rio, Ohio University Southern, Shawnee State University and Southern State Community College. Deputy Title IX Coordinator Dena Warren said she feels it is important for the institutions to come together for the campaign to increase awareness and prevention efforts and provide the tools for students, staff, faculty and the community to speak out against offensive behavior, interpersonal violence and sexual assault.

“Our student advisory board has been working hard to kick off this campaign. They’ve created the message, the visuals, and the videos by working together to find the best way to share this campaign with campus and help it resonate with students,” Warren said. “One of the main goals of this campaign is to start the conversation. It’s important for students to not only hear this message from us as faculty and staff, but to hear it from their peers as well.”

Another way Rio is sharing the campaign is to include the topic during monthly Soup and Substance events. Soup and Substance is an opportunity for students, faculty and staff to share a free meal while discussing important topics such as sexual assault prevention, bystander intervention and survivor-centered response. Kaylynn Bell, student body president and member of the student advisory board, said she feels the campaign is an important way to discuss ways students can look out for one another’s safety both on and off campus.

“As a member of the student advisory board, I felt this was an important message to share and the concept of the See, Hear, Speak campaign was an interesting way to create awareness,” Bell said. “This is a really sensitive topic that a lot of people don’t like to talk about, but we underestimate the severity of the issue across the nation. Even on small college campuses like ours, we need to be mindful and learn what to do if those situations were to occur.”

For more information on this campaign, or to learn more about ways to prevent and report sexual assault, visit Rio’s Title IX webpage at http://www.rio.edu/titleix/.