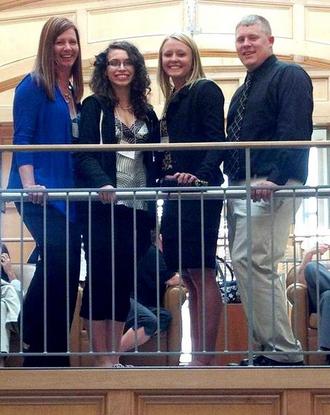 RIO GRANDE, Ohio — Four chemistry majors at the University of Rio Grande have earned statewide recognition for their work.

What’s even more remarkable is that these four students are a part of the very first class of chemistry majors at Rio Grande, slated for graduation in May 2013.

Now, as they enter their senior year, the students already have a major accomplishment under their belts: They have exceeded the expectations laid out for them when the chemistry major was first created at URG.

“Being part of the first graduating class didn’t mean much to me then. It does now,” Sheri Marcum, a senior, said in a press release. “I really had a lot of doubt about whether or not I could do this.”

“I think students underestimate the power they have to impact a program,” Jacob White, Ph.D., associate professor of chemistry, said in the release. “They’ve each contributed to the program in their own way. There is always that opportunity at Rio.”

White said when the Chemistry Department decided to offer a major, the plan was simple:

Juniors meet in the middle in a “bridge” format

But the Provost’s Academic Excellence Initiative at Rio changed that plan. The grant affords student funding to work on special projects with their professors. In this case, the Chemistry Department leaders decided that the students would complete an experiment and present at the Ohio Academy of Science Annual Meeting. Nobody from the Rio Chemistry Department had ever presented at this prestigious meeting before.

“This peer review process is pretty intense,” John Means, Ph.D., assistant professor of chemistry, said in the release. “The students were put through the ringer.”

In order to present at the Ohio Academy of Science Annual Meeting, students must provide original research. So a full year ahead of schedule, the junior chemistry majors were challenged beyond their expectations and would have to deal with a change in plans.

“The students dove into the deep-end of the original research pool,” White said.

Leading the charge was student Sheri Marcum, who had worked for years as a lab technician doing some higher-level work, but needed a four-year degree in order to be promoted. Leadership of her peers came naturally to Marcum, who says her children are older than some of her classmates.

At one point, Marcum worked overnight, took a nap in the morning and went to class in the middle of the day. White and Means both said Marcum’s professional experience helped guide the entire department through the research and experimentation phase of their proposals.

Marcum said each student created an individual presentation, but all of her classmates offered a helping hand. After a peer review, all four abstracts received an invitation to present at the Ohio Academy of Science Annual Meeting.

“Pushing yourself beyond your comfort zone and being equal to others from different universities, it was a great sense of pride that you met the challenge,” Marcum said.

Not only was this the first time anyone from the Rio Chemistry Program presented in front of this statewide audience, they had just seven weeks to prepare when other universities had the entire academic year.

“We are extremely proud of these students,” Dr. Means said. “Things changed on the fly for them and they adapted quickly.”