Rio Graduates Prepare for the Future

Rio Graduates Prepare for the Future 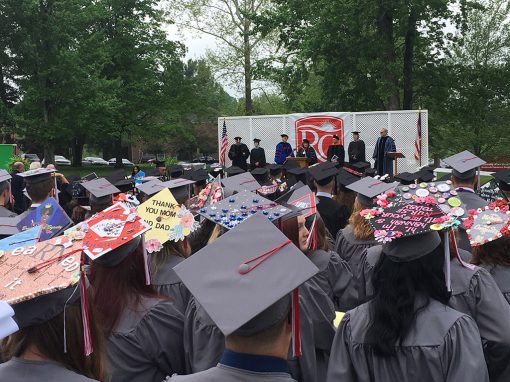 357 students received their degrees Saturday during the 143rd Commencement Ceremony at the University of Rio Grande and Rio Grande Community College.

Rio Grande, Ohio – The University of Rio Grande and Rio Grande Community College are proud to recognize the Class of 2019 as official graduates. 357 students received their degrees Saturday at the 143rd Commencement Ceremony on campus. Interim President Dr. Catherine M. Clark said she is proud of the graduates’ accomplishments while at Rio and is grateful to all of the loved ones who have encouraged them throughout their studies.

“The entire campus community is proud of these graduates and the success we celebrate at the commencement ceremony. We also acknowledge the role of their classmates, friends and family members as we celebrate the graduates’ achievements,” Clark said. “The students became an integral part of Rio during their time here, and we welcome them into the ranks of our alumni.”

Ohio Astronaut Dr. Don Thomas, who served as a mission specialist on four space shuttle missions as well as serving as NASA director of operations at the Gagarin Cosmonaut Training Center in Star City, Russia, was the commencement speaker for this year’s ceremony. Thomas is from Cleveland, OH, and has an extensive background with NASA including spending 44 days in space, completing 692 orbits of the Earth, and serving as International Space Station Program Scientist from 2003-2006. In this position, he was responsible for selecting and scheduling experiments to be performed aboard the ISS. For his numerous achievements, Thomas received the Honorary Doctorate of Public Service from the University of Rio Grande during the ceremony. He said he encourages the students stay focused on their dreams.

“The #1 lesson I have learned in my life is to never give up on your dreams. From first dreaming of becoming an astronaut when I was six years old, it took me 33 years to accomplish my goal,” Thomas said. “My message to the students is to ‘Keep your eyes on the stars,’ which is an astronaut’s way of saying, “Keep focused on your dreams and never give up along the way.”

Among the graduates walking across the stage, 235 are receiving associate degrees, 115 are receiving bachelor’s degrees and 25 are receiving master’s degrees. 34 of these graduates have earned multiple degrees. Provost and Vice President for Academic Affairs Dr. Richard Sax said the class has made a lasting impression on Rio, and he hopes they continue to be influential members of society wherever their lives may take them.

“We were so pleased to honor our 357 graduates this Saturday at Commencement. These students have worked hard in earning their degrees and certificates which will commence the next chapters of their meaningful lives,” Sax said. “We wish them well and support them in their future endeavors.”

The institution’s administration, faculty, staff and boards of trustees wish the Class of 2019 the best of luck and thank the graduates’ families for supporting their achievements during their time at Rio.