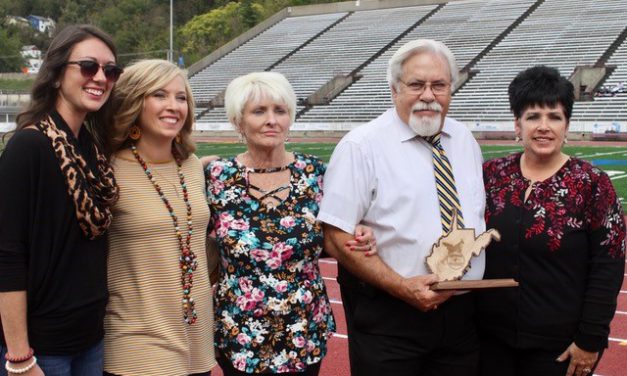 Gary Stewart, pictured here with his family, recently was inducted in the West Virginia Marching Band Directors Hall of Fame. Stewart is an Assistant Professor of Music Education at the University of Rio Grande.

Gary Stewart, Assistant Professor of Music Education, received the honor back in October. Each year, present and former high school band directors from all over West Virginia are reviewed and selected for induction.

Nominated by a group of band director peers Stewart worked with and competed against for many years, the selection committee also consisted of the Director of Culture and the Arts through Governor Jim Justice’s office, Randall Reid Smith.

Stewart, who has a background of competing in state-wide competitions for 33 years, also was the band director for the Point Pleasant Black Knight Band in Point Pleasant, WV for 34 years. He additionally is known for beginning the Black Knight Revue in 1971. In addition to that, Stewart has traveling in a six-state area winning many Grand Champion Awards with marching bands.

Stewart is a Marshall University graduate, having attended on a music scholarship where he completed both a Bachelor of Arts degree and Masters degree in Music Education. His teaching career began in 1969 at Hannan High School in Ashton, WV, and then he taught from 1970-2002 at Point Pleasant High School. Stewart is now completing his 18th year at Rio Grande where he is Director of Instrumental Music and the Director of Summer Band Camps. He additionally is an Adjunct Professor of Music for Marshall University at the Mid-Ohio Valley Center in Point Pleasant, and Director of the Point Pleasant Presbyterian Church Choir.

When he isn’t teaching or directing, Stewart enjoys performing with his Quintet for several Latin dance clubs, and ballroom dancing.

Stewart resides in Point Pleasant with his wife of 42 years, Linda. They have three grown daughters, who all have careers in education; Crystal and (Chip) Hendricks who both teach middle school band in Key West, Florida; Melissa VanMeter, former music educator for 18 years and now Principal at Wahama High School in Mason, WV; and Tiffany Preston, a third grade teacher at Beale Elementary in Gallipolis Ferry, WV.