Rio Faculty Gets Involved in the Community

Rio Faculty Gets Involved in the Community 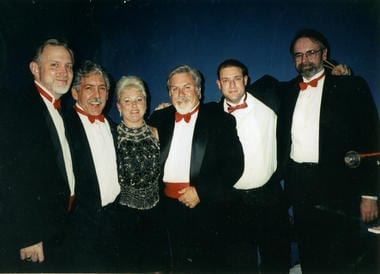 University of Rio Grande and Rio Grande Community College professors are active in their fields and community when not in the classroom. Gary Stewart, director of instrumental music at Rio, has been getting involved with the community for several years through his band, the Gary Stewart Quintet. Stewart said he enjoys getting to work with his fellow musicians and entertain audiences.

“These are guys who have been performing for a long time. Many of them are retired band directors and also perform with other symphonies, orchestras and groups in the region,” Stewart said. “We’ve always tried to be a request band. We have all been playing for years and have experience in several different genres, so we try to pick the best pieces for our clientele and ask them what they want to hear.

The Gary Stewart Quartet has made appearances in several local venues from weddings and class reunions to country club dances since 1971 and has included many local musicians, including school band and choir directors. He said over the years, the group has expanded their circuit to include areas such as Huntington, Charleston, Portsmouth and Marietta, performing a wide variety of genres from Latin and ballroom dance to folk and Dixieland.

“We play several different clubs and events throughout the region and have even had the opportunity to travel to places such as Myrtle Beach to perform at conferences,” Stewart said. “We also perform at area fundraisers for different organizations because it’s a great way to be involved with the community. I always encourage my students to do the same when they have the chance because I feel it is important to support a worthy cause in our communities.”

Stewart has been teaching at Rio for nearly 16 years and had been the band director at Point Pleasant High School for several years before. He said another reason he believes performing in the community with the quintet is important is to set an example as a performer for his students.

“Our students need to see us perform ourselves. I require students to give recitals and performances, so I think it’s only fair they have the opportunity to see us perform, especially on an instrument we teach,” Stewart said. “Even before I came to Rio, I would take my students from Point Pleasant to different events throughout the community because it’s important to give them the opportunity to perform outside of an educational setting and see first-hand what to expect in the field.”

Stewart is also the director of Rio’s Symphonic Band, which includes both students and area musicians. He said he enjoys performing with the quintet and the symphonic band because it is his opportunity to thank the communities for their continued support of local music.

“Community support is so important because if you don’t have the community behind you, you can’t move forward at all,” Stewart said. “For anything you do, you need to build community support to be successful. This area is the base for the quintet. We were able to perform a larger circuit because everyone was so encouraging and would recommend us to groups in other areas. I’m grateful for their support for both the quintet and our symphonic band here at Rio because we would not have the success we do without them.”

For more information on the Gary Stewart Quintet, the Symphonic Band or Rio’s music department, contact Stewart at gstewart@rio.edu.