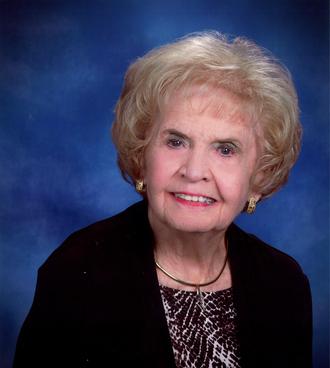 Marianne B. Campbell, Gallia County Chamber of Commerce volunteer and “Talk of the Town” host, will be Rio’s 2017 commencement speaker.

The University of Rio Grande and Rio Grande Community College are preparing to host its 141st commencement ceremony. Each year, the institution invites a commencement speaker to offer the graduating class words of wisdom as they begin their lives after higher education. The Spring 2017 commencement speaker will be Gallia County Chamber of Commerce Volunteer and “Talk of the Town” host, Marianne B. Campbell.

Campbell is a graduate of Pennsylvania College for Women (now Chatham University) where she earned a BA in economics, history and speech. Campbell went on to help put WJEH on the air in 1950 and remained as manager of the radio station until 1967. She then joined the AVCO Broadcasting Corporation in Cincinnati, Ohio as corporate director of community affairs for seven radio and five television stations across the country. Over her time in Gallia County, Campbell has served as a member of several boards throughout the region including the Foundation for Appalachian Ohio, the Gallia County Convention and Visitors’ Bureau, the Holzer Heritage Foundation and the University of Rio Grande Emerson E. Evans School of Business Advisory Council. Campbell said she is thrilled to speak to Rio’s Class of 2017.

“I feel extremely honored and humbled to be the commencement speaker this year. It’s quite exciting and I’m looking forward to it,” Campbell said. “I can’t wait to look out and see all of these young people who will receive their degrees. Thinking about it takes me back to when I was in college and how important an educational background is to move forward in your career.”

Campbell has hosted the “Talk of the Town” radio show on WJEH since April 2005 and is actively involved in several lineage societies in Gallia County. She was born in Pittsburgh, Pennsylvania, and moved to Gallipolis after her college graduation in 1948. Campbell said although she did not grow up in Ohio, she has a strong connection to Gallia County and Rio Grande.

“My ancestors on my mother’s side landed in Gallipolis from France in October 1790, so Gallia County means a great deal to me. I’ve always had an interest in the University of Rio Grande and I was a part of the effort to start Rio Grande Community College,” Campbell said. “I also had the opportunity to take courses in the education department when it was still known as Rio Grande College.”

Campbell has received several awards and honors earning her the Distinguished Alumna Award from Chatham University, formerly Pennsylvania College for Women in 2008 at her 60th class reunion, such as being the first woman elected to the Board of the National Association of Broadcasters, 1967; named in the American Business Women’s Association Top Ten Women of the Year, 1961; and installation to the Ohio Women’s Hall of Fame, 1998. Recent honors she has received include appointment to the Elite Corps of the Executive Order of Ohio Commodores in 2012 and being named the 2014 Child of Appalachia by the Foundation for Appalachian Ohio. Rio President, Dr. Michelle Johnston, said Campbell has been a true leader in her field and admires the hard work she has put into volunteering for numerous organizations within the region.

“Marianne Campbell’s reputation and notoriety speak for themselves,” Johnston said. “Marianne has been a pioneer in the world of radio broadcasting as well as a “volunteer extraordinaire” promoting the quality of people that live in this region of the country. I am eager to hear her thoughtful words of wisdom and advice for our graduates as they move forward into their own careers.”

The Commencement Ceremony will take place Saturday, May 6 at 1:00 p.m. on the Campus Green in Rio Grande with 425 students receiving degrees.