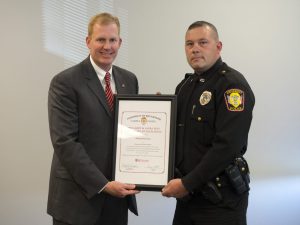 President Ryan Smith presents Officer Richard Harrison with the ‘Larry and Laura Rees Certificate of Excellence Award’ for being named the University of Rio Grande Campus Police Department ‘Officer of the Year’.

The ‘Larry and Laura Rees Certificate of Excellence Award’ was presented this year to Officer Richard Harrison.

The award, chosen by officers within the police department, was bestowed upon Officer Harrison for his leadership and commitment to campus safety. President Ryan Smith was in attendance to present the award and noted Officer Harrison’s leadership, courtesy and compassion.

Campus Police Chief Scott Borden commended Officer Harrison for not only his service to the Gallia County area, but to the country. Officer Harrison is a 22-year law enforcement veteran having served local departments before joining the University in October 2017. Officer Harrison has also served six years in the United States Army, and was deployed overseas for two years.

“Receiving this award really made an impression on me,” Officer Harrison stated. “To know that my fellow employees thought that much of me to vote for me is truly humbling.”

Officer Harrison continued to say he is very grateful for his role with campus police.

“Everyday I get to make an impression on the students here at Rio,” he said. “I enjoy interacting with them and sheading a positive light on law enforcement.”

He added he is thankful to everyone involved with making the award possible.

Named after the Rees’ of Westerville, OH, this award has previously been bestowed upon Carolyn Berry (2018); Mark Kinney (2017); and Jeff Howell (2016). Larry Rees is currently a University of Rio Grande Trustee.