The Atwood Achievement Award recognizes alumni for personal achievement reflecting credit upon the University, including professional or civic accomplishments, and who have an interest in promoting the ideals and objectives of the institution. The 2020 winner, Mr. Stephen Moses ’80.

This 1980 Rio Grande graduate now spends his time in the newspaper business, where he currently serves as the Editor/Ad Rep for The Robeson Journal Newspaper – a weekly, independently owned newspaper in Lumberton, North Carolina. But there is more to this story on M. Stephen Moses.

Rio Grande was close to home for Moses, and quite a legacy. Most of his family, including his well-known parents, had gone to college at Rio. Even 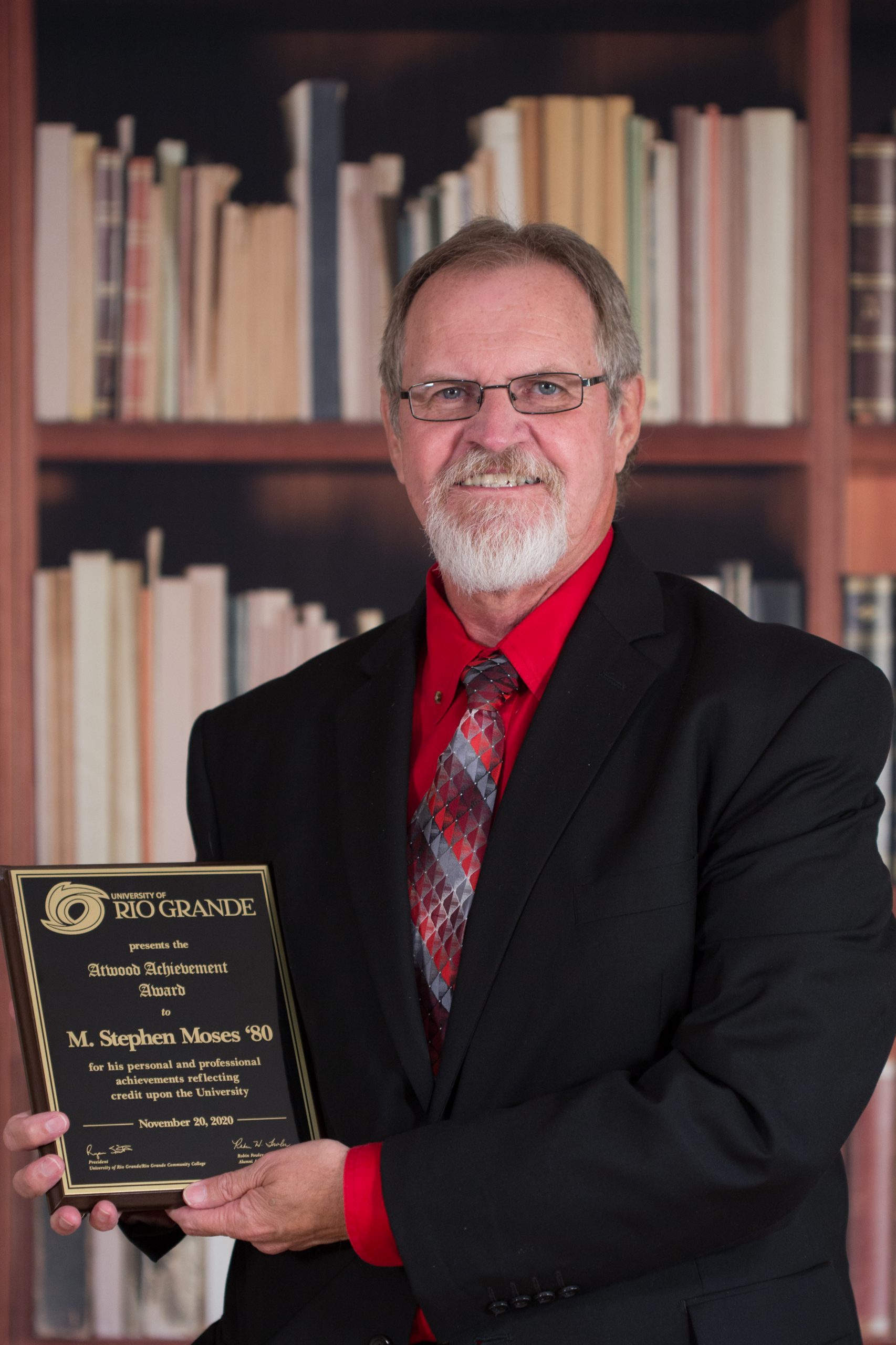 his cousin, Peg Thomas, was a counselor, and so choosing this college made perfect sense. Once on campus, Moses found himself working on his major – Communications – and keeping up as team manager for the Junior Varsity Men’s Basketball team. He also played golf, was a member of Students in Free Enterprise (SIFE), and soon became involved in the school’s newspaper at the time, ‘Signals’. And if that wasn’t enough, Moses was helping pay his tuition by working part-time at the Bob Evans Restaurant.

After that job, Moses spent four years with the retail athletic chain, Foot Locker as a sales manager, working in stores in several states including Georgia, Alabama, North Carolina, and South Carolina. He met his wife, Mable, after leaving Foot Locker, and they moved back to Lumberton where Moses then spent eight years in the manufacturing business while pursuing his true calling – writing for a local newspaper. Beginning as a stringer, Moses now has had a 20-year stint in the business.

But it’s all not all about his job. In his community, Moses has served in many civic roles. He is a member of the Robeson County Advisory Council with the North Carolina Cooperative Extension Service, is an Associate Board Member of the Robeson Regional Agricultural Fair, and serves on the Robeson County Fair Board as historian. He has also served his community through roles in the Cliffood Golf Association and has worked as an activist with the Palmer Prevention Drug Program. He also is an active member of Chesnut Street United Methodist Church and was named their Men’s Ministry “Man of the Year” in 2016.

Moses’s history with Rio also runs deep. His parents, Roy and Josine Moses, served on the Executive Committee for the University of Rio Grande’s ‘Lighting the Way’ Capitol Campaign, while he served as an alumni speaker for the campaign. Moses also was instrumental in writing a letter of recommendation to the College Basketball Hall of Fame Committee about Rio Grande Redmen’s basketball player, Clarence ‘Bevo’ Francis, who later was inducted. Bevo played alongside his Moses’ father during the glorious 1952-54 seasons.

Moses and his wife have been married for 30 years and have one son, Jon Brian They reside in Lumberton, North Carolina.