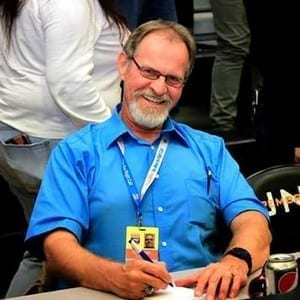 A 1980 Rio Grande graduate now spends his time in the newspaper business, where he currently serves as the Editor/Ad Rep for The Roberson Journal – a weekly, independently owned newspaper in Lumberton, NC.

Stephen Moses graduated with a Bachelor’s degree in Sales Communication. Born in Gallipolis and growing up in Thurman, Steve attended Rio as did his mother and father before him. Even his two younger brothers all graduated with degrees from Rio. After he graduated, Steve spent two and a half years in management with Bob Evans Farms, but started working with the Rio Grande Restaurant (Down on the Farm) in high school. He worked up from dish washer to bus boy, to grill cook and then KP.

After that job, Steve spent four years with the retail athletic chain, Foot Locker as a sales manager, working in stores in several states included Georgia, Alabama, North Carolina and South Carolina. He met his wife, Mable, after leaving Foot Locker, and they moved back to Lumberton where Steve then spent eight years in the manufacturing business, while pursuing his true calling – writing for a local newspaper.

Beginning as a stringer, Steve now has had a 20-year stent in the business. He is looking into early retirement in two years. He and Mable have been married for 30 years.

1.     What made you choose to pursue a college education at Rio Grande?

Rio Grande was close to home (just four miles east on U.S. 35) so I figured I would save my parents a lot of money. (I was once thinking about attending UCLA). Of course, I was joking, but I could have gone to Ohio University or Marshall University. I guess you could say I was a legacy because most of my family went to Rio and I wanted to keep the tradition alive. My cousin, Peg Thomas, was a counselor there and she helped me all the way through, advising me on what classes I needed for my major. She was always so positive.

Aside from my classes, working on my major, and keeping up with my studies, during my freshman year, I was the team manager of Rio’s Junior Varsity Men’s Basketball team. I spent many hours studying while washing socks, jocks and towels, along with uniforms, in the training room. This is where my nickname ‘Amos Moses’ came from. The coach, Bob Leith, who was also my American History and Ancient World History professor, gave me that nickname, after a song by Jerry Reed called appropriately, ‘Amos Moses’. I also played on the golf team. Later during my years at Rio, I became involved with the college newspaper, ‘Signals’ and Students in Free Enterprise. I kept working part-time Down on the Farm, helping my parents with my tuition and travels.

3.     What did Rio offer you besides an education?

It taught me how to multi-task which later has helped me in my career, by being able to juggle work, school, and extracurricular activities. Things in the world do not always go your way sometimes, but it is nice to know you can do things by prioritizing them.

4.     What are some of your favorite Rio memories?

When I was the JV basketball manager during the winter months, Coach Leith and I would do bed checks with the players the night before a game. My car was a little Chevy Monza and Coach Leith was about 6’7. Some nights it was very cold, maybe in the 20s, and for him to get in my little car – a standard shift – the car would jump because it had to be choked. We played two prison teams on our schedule and it was kind of scary, knowing that we were locked inside with convicts. So when I tell people I’ve been in prison twice, their eyes get real big and then I tell them we played basketball there and they are relieved.

Another memory that stands out is after a late afternoon of playing golf with a close friend of mine, we hurried back to campus because I had a six o’clock class in Transactional Analysis. Arriving on campus a few minutes before the class, I didn’t time to take my clubs to the car so I took them to class. The late Dr. Sofranko laughed when I came in, lagging my clubs. I didn’t know he played golf, too, so we hit the golf course the next day and had a great time. That’s why Rio is so special to me. Professor Earl Thomas, my speech and media teacher also was a golfer and we went out many times.

5.     What did you learn about yourself during college?

Things are not always going to be peaches and cream. I flunked a mid-term psychology class but I picked myself up. After that, I studied hard the rest of the quarter and came out with a ‘B’ in that class.

I started writing when I was 10 years old when I was the secretary and news reporter of the Centerville Electrons, my hometown 4-H club. Rio showed me the ability to do many things, and after watching the movie, ‘All the President’s Men’ with a professor and some classmate, I knew that the newspaper business was in my future. Not at the present time, but I knew my writing ability would help me someday.

It’s because of who I am. Rio Grande was very personable and I still keep in touch with several friends I made while at Rio. Bob Leith and I still keep in touch a lot. We call each other or write, wanting to know what’s up at Rio among other subjects. I keep up with many of my friends who are still at Rio in administration like Susan Haft, Ken French, and Dave Smalley.

Several years ago, the men’s Red Storm basketball team traveled to Florida for some exhibition games and the team stopped off in Buies Creek, NC to play against Campbell University, a NCAA Division 1 school. Being only 60-70 miles away, my wife and I made arrangements with Coach French to meet the team before the game, had a pre-game meal with them, and then watched the game. Rio won the game, 67-65, over the Camels. As we were walking back to the car, it hit me that the Red Storm won by the same score that my dad’s team, who he played with Bevo Francis from 1952-54, beating Wake Forest in a game played in Raleigh during the season. What made it special, too, was that after the game Coach French, his staff and players all came by and shook our hands and said thanks for coming to see them play. This is what makes being an alumnus of Rio Grande so special.

8.  Do you have any advice for current students?

Be passionate about your studies and career choices after college. Like my late dad always told me, be happy with what you are doing. I am in a job now that I thoroughly enjoy and cannot wait to get to work in the morning, or when I am covering a sporting event at night. There are many ups and downs in life, so be prepared. Give it your best shot, as the old cliché goes.

9.  Is there anything else you would like to add?

Visit the campus often when you get the chance. Every time I go back, there have been many changes, but the memories are still there. Whether it was from walking from Anniversary Hall after a Management class in the dead of winter to Lyne Center for a diving class. Keep that Rio Pride burning inside of you and be proud to call Rio Grande a part of your life.