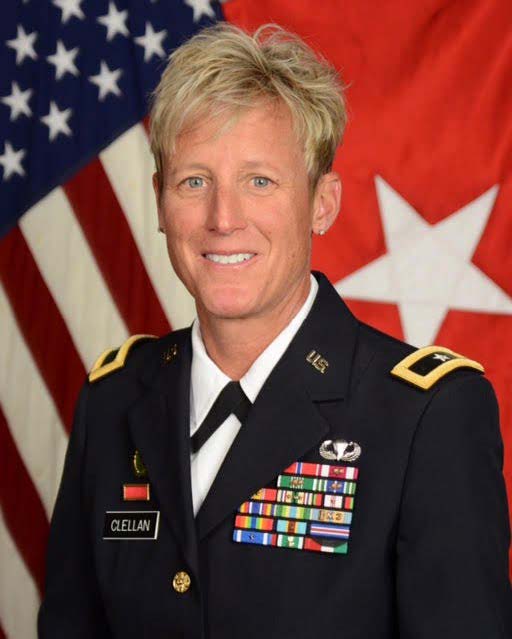 Brigadier General Clellan was commissioned from the Army Reserve Officer Training Corps at Rio Grande College in Ohio, as a Second Lieutenant in the as a Military Police Officer in 1989. Upon commissioning, she served three years on active duty as a Military Police Platoon Leader in the 978th Military Police Company. During her three years on active duty, her unit deployed to Honduras, Desert Storm and Panama. In 1992, she left active duty and became a school teacher teaching middle school science. After being in the Inactive Ready Reserves for three years, she returned to duty as a reservist in the 91st Training Division in Denver, CO where she served as an Observer/Controller Training Officer for one year.

In 1998, she joined the COARNG as the 220th Military Police Company Commander and deployed to Tazar Airbase, Hungary in support of Operation Joint Forge, in the Balkans. Upon returning from Hungary, she began working full time as the Quality Manager for the Commander, COARNG. Her traditional assignments included Commander Headquarters, State Area Command and S1 (Personnel Officer), 89th Troop Command. In 2002, she was chosen to serve as the full-time Assistant Professor of Military Science (APMS) and Executive Officer at CU Boulder ROTC, where she taught leadership and tactics to Army cadets. In 2006, she left the Full Time force of the National Guard and went back to being a traditional Soldier, serving as the Personnel Officer for Special Operations Detachment-Korea, while simultaneously working as a civilian in the Department of Veterans Affairs in Denver, CO.

In 2007, she took command of the 193d Military Police Battalion whose missions included the 2008 Democratic National Convention and Detention Operations in Afghanistan in support of Operation Enduring Freedom (OEF) 2010-11. Upon return from OEF, she was selected for the Army War College and assigned as the Brigade Executive Officer for the 89th Troop Command. In 2012, COL Clellan was chosen to command the 168th Regimental Training Institute. In 2014, she was selected as the Land Component Commander for the Colorado Army National Guard, overseeing operational readiness of 7 major Commands,~3800 Soldiers. In 2017, she was selected to serve in her current position as the Assistant Adjutant General for the Colorado Army National Guard.

Concurrently in her civilian career, she works as the Chief, Leadership and Employee Development at Region 6, US Fish and Wildlife in Lakewood, Colorado, where she is the lead in the design, development, implementation, management and assessment of conservation leadership and workforce development. She coaches teams and leaders in problem solving, work methods and procedures. She also serves as primary advisor to the Regional Director on training, leadership and organizational development strategies.

Clellan is married to Stephanie Harding. They live in Golden, CO. She enjoys the outdoors, hiking, biking, and snowboarding.