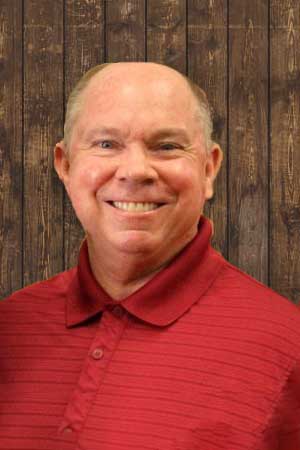 Kevin Purcell, a 1979 graduate of the University of Rio Grande, was always very involved on campus. He was a Varsity Baseball team member, scorekeeper for the Men’s Basketball team, Lyne Center Summer Life Guard & Pool Maintenance Assistant, drove the bus for the Athletic Department and Grand Chorale, and also was a Campus Student Security Guard. On top of that, Purcell was focused on his studies and obtaining his degree in physical education which led him down a very successful path.

After earning his Bachelor’s Degree from Rio, Purcell attended Eastern Kentucky University and received his Master’s Degree. Shortly thereafter, he came back to his Alma Mater, accepting a Health/Physical Education teaching and Athletic Department coaching position.

At Rio, Purcell’s coaching responsibilities included leading the Men’s Track and Cross Country programs while serving under John Lawhorn as an Assistant Basketball Coach. After several successful basketball campaigns including two trips to the NAIA National Championship tournament, Purcell was given an opportunity to serve under Billy Hahn; Head Men’s Basketball Coach at Ohio University.

While at Ohio, Hahn & Purcell coached MAC standouts and NBA draft picks Dave Jamerson and Paul “Snoopy” Graham. From Ohio University, Purcell was named Assistant Athletics Director at Miami University where he served under R.C. Johnson. While at Miami, he was part of the Administration that hired two Cradle of Coaches inductees Randy Walker, Football Coach at Miami and Northwestern University; George Gwozdecky, Hockey Coach at Miami, Denver, and the NHL; and Joby Wright, 1992-93 Men’s Basketball MAC Coach of the Year.

After returning to coaching, Purcell served as an assistant Men’s Basketball Coach at The Citadel and The University of Wyoming. While at Wyoming, Purcell was involved in recruiting and coaching WAC Freshman Player of the Year, Ladrell Whitehead who went on to be a 1st Round NBA Draft Pick, and NBA Top 20 career shot blocker Theo Ratliff.

Since retiring from coaching, Purcell has dedicated his professional career to sales and business development, now serving as President of Logan Services, the 2nd largest Trane dealer in the United States. He is been married to Steffi Ross since 1979; a past University of Rio Grande Homecoming Queen/Grande Choral Member and daughter of former professors Merlyn and Edie Ross. They have two children, Allison and Robbie, and a daughter in law, Cayla, who reside in Athens, Ohio.

2.     What made you choose to pursue a college education at Rio Grande?

4.     What did Rio offer you besides an education?

While as a student, I was able to have part-time teaching opportunities, and other employment opportunities including work at: Bob Evans Farms (Intern); Paul R. Lyne Center (Family Night Director); Boyd Hall (Resident Director); Foreign Student Advisor; and Continuing Education as a Youth Gymnastics Instructor.

5.     What are some of your favorite Rio memories?

7.     What did you learn about yourself during college?

I was capable of achieving higher academic success, but realized it took a greater commitment to time management and preparation. I also learned, I was capable of being a confident leader enhanced by the opportunities extended by several Rio Faculty and Staff members.

Rio taught me the value and impact of taking an interest in people individually. Also, empowering people to learn and develop.

Rio Faculty and Staff prepare graduates to achieve successful careers by focusing on personal 1 on 1 attention with passion and commitment to excellence. I’m proud to have been on the receiving and giving side of this personal attention to several members of the student body.

10.  Do you have any advice for current students?

Take advantage and maximize the opportunities smaller university campuses offer. Participate in activities that are rewarding and where applicable pursue ones that stretch you beyond your present day comfort zones.

11. Is there anything else you would like to add?

Thanks for giving me this opportunity, but the real thanks goes to all those faculty and staff members at The University of Rio Grande that influenced my career path.