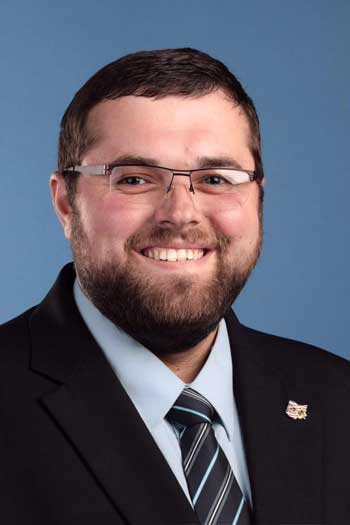 In 2013, Jordan Pickens married his high school and college sweetheart, Calee, who he says he is now fortunate enough to work alongside at Southern High School. The couple currently reside on their 3 acre homestead on 143 in Pomeroy where they are raising two kids – Andrew, 2, and Clara, 3 months old.

Pickens has taught several different positions at Southern Local, including Intervention Specialist, Carol M. White P.E.P Grant Coordinator, A.S.K Afterschool Coordinator, and Health teacher. Two years ago I was able to step out of my comfort zone and was fortunate to teach 8th grade Science at Meigs Local. In the fall of 2017, I returned to Southern High School where I currently teach American History, Geography, Psychology, and Sociology.

In my spare time, outside of teaching, I am very active in Freemasonry. I am Senior Warden at Middleport Masonic Lodge #363 and the 2019 Worshipful Master (presiding officer) of Harrisonville Masonic Lodge #411. I’ve held various positions in Pomeroy Chapter of Royal Arch Masons Chapter #80, Bosworth Council of Royal and Select Masons #46, and Ohio Valley Commandery #24 of Knight Templars. My wife Calee and I are the Associate Matron and Associate Patron respectively at Racine Chapter #134 – Order of the Eastern Star.  I am also a 32° Scottish Rite Mason in the Valley of Gallipolis. I am also a member of Valley Lodge #169 Knights of Pythias (non masonic fraternity) in Nelsonville, as well as a member in the Honorable Order of Kentucky Colonels. I currently serve as President of the Southern Tornado Alumni Association. On the historical side of my life, I am a past President of the Meigs County Pioneer and Historical Society, and currently serve as a judge for Ohio History Day state contest.

In the spring of 2014 along with a Dr. Ivan tribe released a local history book titled “Images of America: Meigs County.” In 2015 I was named an Associate Producer of a documentary produced by Evan Shaw and WOUB titled Our Town: Pomeroy, which was fortunate enough to be nominated for a local EMMY®. This coming December, My second book, that I co-wrote with my wife Calee, will be released titled “Historic Tales of Meigs County.”

What made you choose to pursue a college education at Rio Grande?

I began college at Ohio University where I was originally a communications major. I didn’t care for the culture of the campus, and I felt like most of my professors didn’t care about their students.  After thoughtful consideration I transferred to the University of Rio Grande where I decided to become an education major with my focus on Integrated Social Studies.

How were you involved on Rio’s campus?

During my time at the University of Rio Grande I was elected to the history honors fraternity known as Phi Alpha Theta, and eventually became the Vice President of the Rio Grande Chapter (Alpha Alpha Delta.)

What did Rio offer you besides an education?

Transferring to Rio Grande allowed me to become what I am today. It allowed me to expand my love of history and work closely with my history professors (Specifically Dr. Ivan Tribe, Prof. Ellen Brassell, Prof. Judithe Thompson, and Dr. Sam Wilson) as well as my education professors who challenged me to be the best I could be. Specifically, Dr. William Capehart, Prof. Diane Downard, Dr. Nanetta Fults, and the late Dr. Alan Dean.

What are some of your favorite Rio memories?

I loved having Ohio History Class with Dr. Ivan Tribe as well as having review sessions with Prof. Ellen Brassell.

Was there any teacher, advisor, coach, etc. that made an impact on your life?

Do you have any advice for current students?