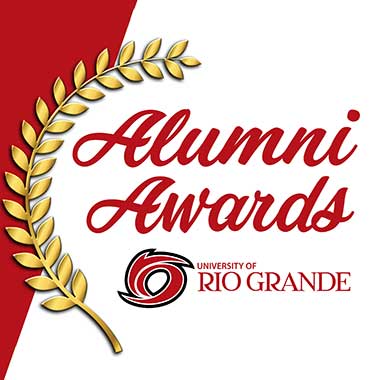 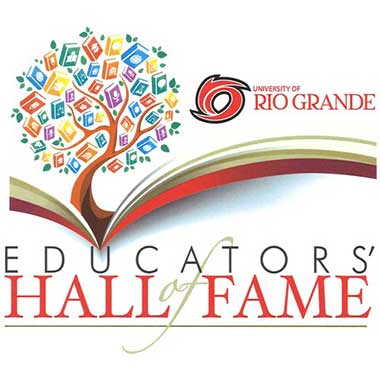 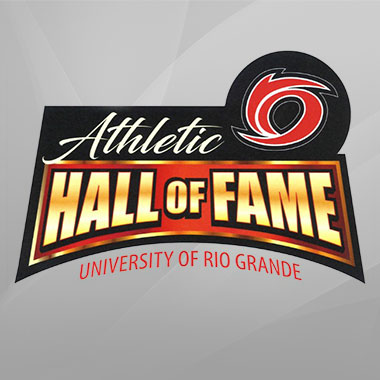 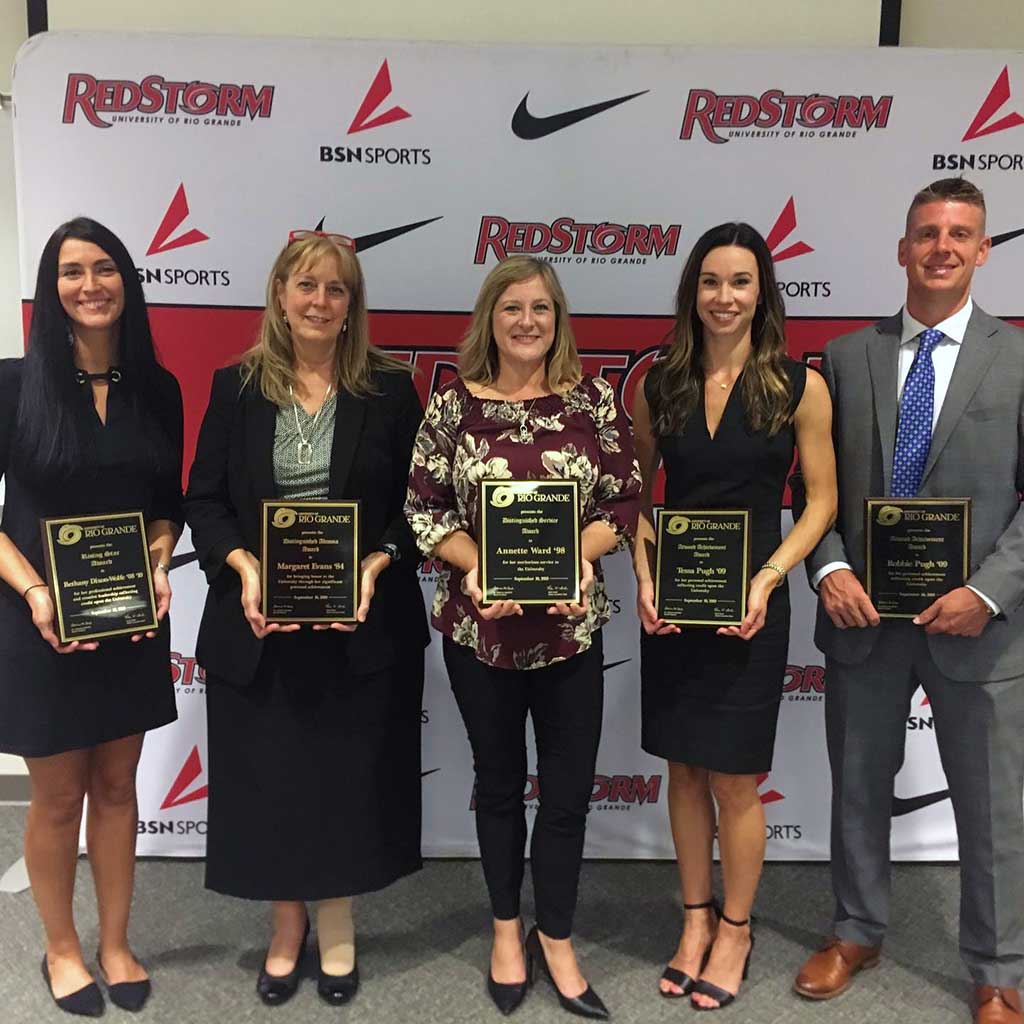 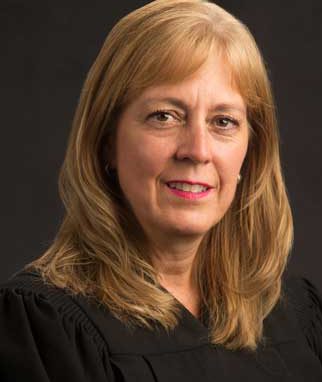 Margaret Evans graduated from the University of Rio Grande in 1984 and was awarded the’ Outstanding Graduate Award’ (doesn’t exist anymore) at Commencement. While at Rio, she was a member of the Grande Chorale and worked on the newspaper and yearbook staffs. Earning a degree in Communications Comprehensive, which included teaching credentials in English, Speech, Reading, Literature and Journalism, she taught in public high schools for six years. After her first year of teaching, Evans was awarded the Sallie Mae Outstanding First Year Teacher Award. Evans then attended the University of Kentucky School of Law, graduating in the top fifteen percent of her class in 1993. She practiced law in a private firm in Huntington, West Virginia until 1997, when she returned to Gallia County. In 2003, Evans was appointed by Governor Robert Taft to the bench of the Gallipolis Municipal Court and then won election to that position that same year. While on the Municipal Court bench, she also taught a Constitutional Systems class for Rio as an adjunct. Evans is the first female elected to a judicial position in Gallia County. Evans served in the Municipal Court until 2017, when she was elected to and began service as the Judge of the Gallia County Common Pleas Court, General Division.

Her connection to Rio did not being with matriculation to the University. Evans’s father, Clyde Evans, served Rio for most of his career in various administrative positions and continues to serve on the Board of Trustees after retiring from Rio and the State Legislature. Consequently, Evans, her sisters and brother, were all fortunate to be able to grow up on campus.

Her husband, David Smalley (also a Rio grad), began teaching and coaching Women’s Basketball at Rio in 1992.  His position allowed the couple to rear their daughter (Evans Smalley) on the Rio campus, in the family atmosphere that Rio people provide, while taking advantage of the cultural, educational and athletic benefits of the university. 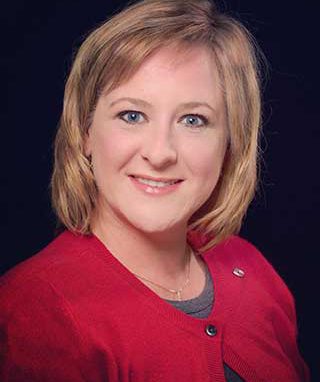 Annette Brown Ward is a three-time graduate of Rio Grande, earning her Associate of Arts and Bachelor’s degrees in Psychology and Master of Education in Classroom Teaching degree. After a lengthy career as a professional in the mental health field, Annette began her tenure in the Rio administration in 2007 as the Director of Alumni Relations.  In 2011, Annette was selected to serve additional roles as Executive to the President and Secretary to the Board of Trustees.

Annette has been honored to serve her community in a variety of ways, including past President of the Gallia County Convention as Visitors Bureau, 2013-2014 Gallia County United Way Honorary Campaign Chair,  and current member of the Rio Grande Village Council.  She has also been active on the Rio campus.  Annette has served as the advisor for her sorority, Lambda Omicron Psi, and also for All Greek Council.  She has also served as co-chair for the Commission on Archive and is currently co-chair of the Commencement Committee.

Annette, the daughter of alumni Dean and Petrea Brown, is originally from Jackson, Ohio, but has called Gallia County “home” since moving into Davis Hall as a freshman.  She has two amazing daughters—Jessica and Kathryn—who are the very best part of every day. 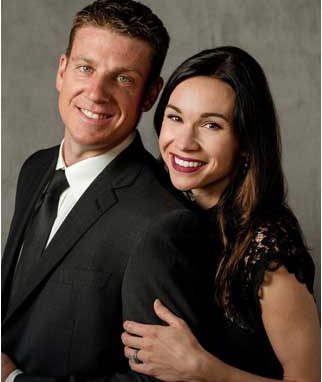 A little over two years after graduation, Robbie and Tessa set their dreams of entrepreneurship in motion when they purchased a foreclosed seven screen movie theater in Gallipolis formerly known as Spring Valley Cinema. After a total renovation to the building and a conversion from 35mm film reels to fully digital projectors, the couple gave the theater a new name, Silver Screen VII, and opened the doors to the public in November of 2011. Silver Screen VII continues to operate under their ownership, and the couple is proud to have the opportunity to offer a form of entertainment to the members of Gallipolis and surrounding areas.

In 2013 Robbie and Tessa founded RocketVII Interactive, a business that began as an advertising agency but quickly shifted to an outdoor advertising company specializing in digital billboards.  After installing and operating three digital billboards of their own in Gallipolis, Robbie and Tessa established a partnership with another Gallipolis couple in 2015 and over the next three years installed twelve additional billboards across Ohio. As part of RocketVII’s overall strategy to grow and sell, the business did just that in January 2019 when it sold its assets to Lamar Advertising Agency, one of the nation’s leaders in the out-of-home advertising industry.

In addition to Silver Screen VII and RocketVII, Robbie and Tessa briefly owned and operated a self-serve frozen yogurt and gourmet popcorn shop known as Pip and Hud’s (named after their children) located in downtown Gallipolis from 2015-2017.

Robbie and Tessa take pride in working together in all aspects of their business(es). By communicating effectively with one another and respecting each other’s ideas and opinions, they are successfully able to implement new strategies, develop marketing campaigns, manage inventory, maintain their workforce, conduct accounting functions, among other responsibilities.

Even though they are both fueled by their passion for entrepreneurship, their greatest sense of accomplishment stems from their joy of parenting and their love for their children and each other.

Robbie was a member of the Gallipolis Community Improvement Corporation from 2013-2017. He is a current member of the Downtown Revitalization Project and also serves on the Board of Directors at Holzer Health System. He was the recipient of the Marianne Campbell Volunteer of the Year award in 2014 from the Gallia County Chamber of Commerce and the Gallia County Citizen of the Year award in 2016 from The Gallipolis Lions Club. 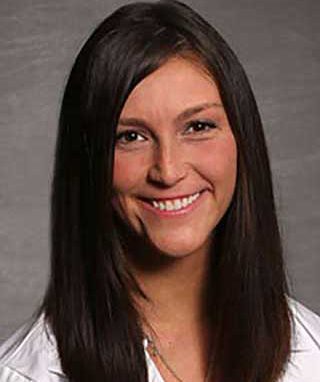 Bethany working as a registered nurse in 2008. Her work experience includes critical care nursing, cardiac nursing, and nursing education. She is currently employed as a Family Nurse Practitioner. In 2016, Bethany had the privilege of being involved in new clinic start-up with Holzer Health System, called The Uptown Clinic. Bethany says she gained much satisfaction through her work in this clinic. 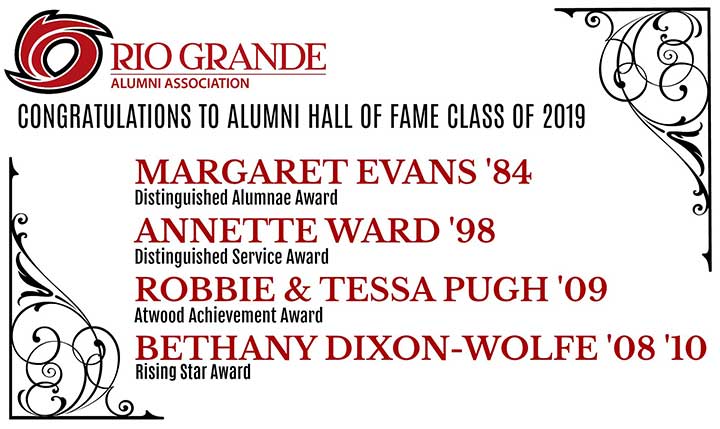 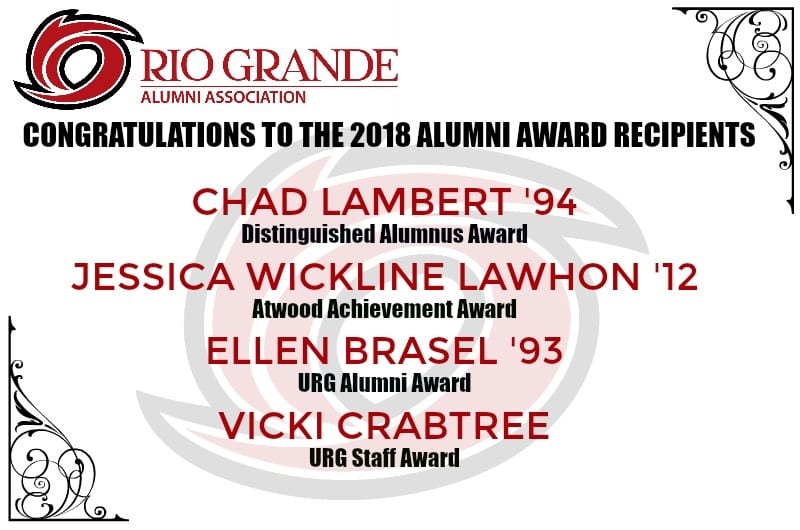 Chad Lambert is a Jackson, Ohio native and 1994 graduate of the University of Rio Grande. As a commuter student, he received a Bachelor of Science degree in Mass Communications along with his wife, Angela Price-Lambert (’94). At Rio, Lambert was editor of the student newspaper, the Signals, and a part-time production assistant at WKOV radio in Jackson (now known as Mix 96 FM). During his run on the newspaper, Lambert created the comic strip Possum At Large, which he would later dust to become an award-winning comic book series.

Lambert moved to Cincinnati in 1994 and eventually became the producer of the legendary Gary Burbank Show on 700 WLW, where he also served as Executive Producer of the nationally-syndicated Earl Pitts: American commentaries. Burbank was inducted in to the National Radio Hall of Fame in 2012.

As a comic book writer, Lambert is a two-time Harvey Award winning writer for his work in Dark Horse Presents and small press comics, including Possum At Large, Kill the Revisionist, and Return to Point Pleasant. Legendary science-fiction writer Ray Bradbury referred to Return to Point Pleasant as “superb and frightening! Bravo!”

Chad also appeared in the feature-length documentary Eyes of the Mothman, which explores the Appalachian folklore of paranormal activity in West Virginia.

Chad was also one of the writers of the Megamind and Kung Fu Panda comics from Ape Entertainment and DreamWorks Animation, as well as BloodRayne for Digital Webbing Press. Chad is also the editor of COMICS, a biography series that focuses on stand-up comedians, television sitcom stars and other influential funny people from the past 50 years. Titles so far include George Carlin, Lucille Ball, The Three Stooges, Saturday Night Live, WKRP in Cincinnati and Redd Foxx.

Chad currently still lives in Cincinnati with Angela (married 23 years) and their children Spencer (16) and Sam (13).

During her time at Rio, Jessica was President of the American Marketing Association (AMA).

A month after graduating from Rio, she began her professional career as an accountant for Elemetal’s precious metals refinery in Jackson, OH where she worked until 2014 when the company relocated her to Dallas, Texas to work at their headquarters. Just after being in Dallas for two years, Jessica transitioned from accounting staff, to manager, to controller of the company’s precious metals bullion entity. During that time, she completed a successful software implementation for the company’s bullion business.

Jessica currently resides in Dallas and continues to work for Elemetal.

Ellen Brasel is a 1993 graduate of the University of Rio Grande. A non-traditional student, she obtained her Bachelor’s in History from Rio, while minoring in Political Science. Ellen says that Rio’s outstanding faculty and their belief that Rio students could succeed along with their educational tutelage enabled her to be prepared for graduate school.

In the spring of 1997, Ellen graduated from Ohio University with a Master’s of Arts degree in History, and later in 2001, Ellen found herself back on the campus of Rio where she joined Rio’s History Department and remained there until she retired in 2014.

Ellen currently resided is Worthington, OH and takes classes at Ohio State University in their ‘Over Sixty Program’. She said she enjoys spending time with family, old acqaintances, gardening, book club, and bridge.

Vicki Crabtree is a Carrollton, Kentucky native and a 1975 graduate of Morehead State University. She later received her Master’s in Education in Vocational Adult/Technical Education from the University of Cincinnati in 1979.

Vicki came to Jackson, Ohio, from Morehead State in 1976 to work at the Southern Ohio Skills Center (Manpower Training Center). She was an Adult Business and Office Education instructor from August 1976-September 1982. During this time period, she also taught an intensive office education night class for Buckeye Valley Career Center in Allensville, Ohio, and a Saturday class for the Jackson-Vinton County Youth Education Training Program (YETP) at Buckeye Hills Career Center in Rio Grande.

Several of Vicki’s honors are awards include: Ohio Two-Year College Teacher of the Year Award 2006; University of Rio Grande Edwin A. Jones Excellence in Teaching Award 2004; appointed as a biographical candidate to represent Rio Grande in the Empire Who’s Who of Women in Education; and she also was selected for inclusion in Who’s Who Among America’s Teachers. Vicki is currently the Assistant Professor of Office Technology, Co-Chair of the School of Health and Behavioral Sciences, and advisor to allied health and office technology students.  She additionally teaches classes at the Rio Grande Jackson Center.

Vicki presently lives in Jackson, Ohio, with her husband, Herman D. Crabtree, Sr.  She has two daughters and a stepson, and nine grandchildren. 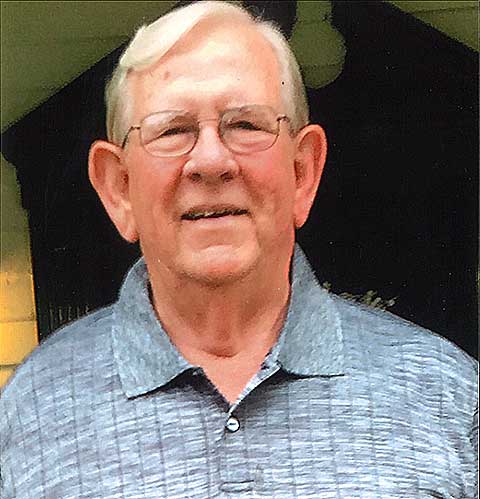 Rio Grande, Ohio – The University of Rio Grande and Rio Grande Community College takes pride in honoring veterans who have served and are continuing to serve our country. As part of this endeavor, Rio created the “Jim Marshall Veteran of the Year Award” to recognize... 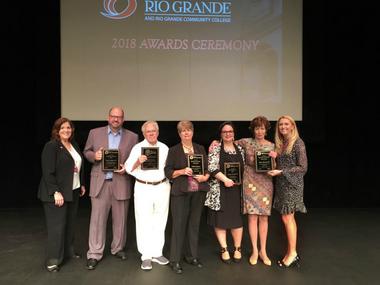 The University of Rio Grande and Rio Grande Community College has achieved several accomplishments since first opening in 1876. To commemorate the dedication put into building and opening the institution, and the people who have helped it to thrive along the way, Rio... 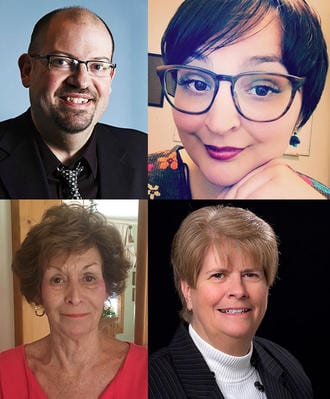 Rio Grande, Ohio – The University of Rio Grande and Rio Grande Community College are proud to announce the winners of the 2018 Alumni Awards. Every year, the Awards and Recognition Committee of the Alumni Association Council chooses winners from nominees submitted by... 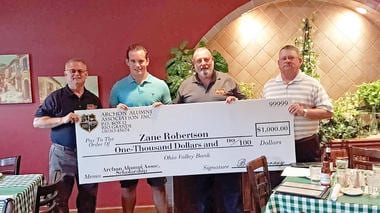 The University of Rio Grande and Rio Grande Community College remains an important part of its alumni’s lives. To give back to future students, one fraternity has created a scholarship for relatives of former members. Rio Freshmen Zane Robertson from London, Ohio, is... 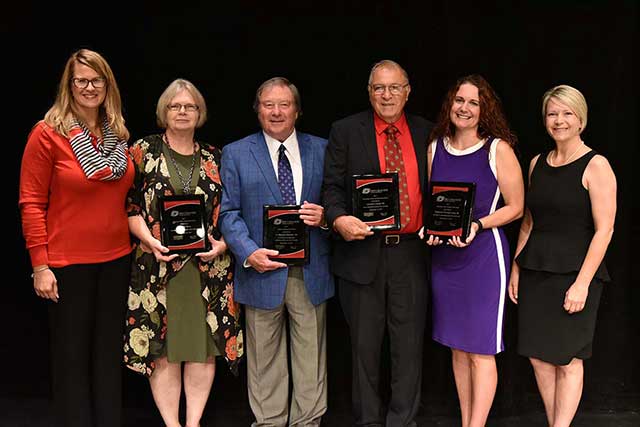 University of Rio Grande and Rio Grande Community College has achieved several accomplishments since first opening in 1876. To commemorate the dedication put into building and opening the institution, and the people who have helped it to thrive along the way, Rio...

All former Rio Homecoming Kings and Queens, the Rio Grande Alumni Association is looking for you! We want to invite you back to participate in our Homecoming Parade on Friday, Nov. 17 at 5 pm here on campus. Please contact Delyssa Edwards, Director of Alumni...


*No longer have award

Learn more about the University of Rio Grande and Rio Grande Community College!